The Southern Research Advisory Board, comprised of emerging leaders in the Birmingham business community who are committed to enhancing the organization’s mission of scientific and engineering advancement, has added three new members.

Key Foster of McWane Inc., Angele Monconduit of Alabama Power, and Beeland Nielsen of Coca-Cola Bottling Co. UNITED joined the Advisory Board during its first quarter meeting on Feb. 21.

“Southern Research is making great strides in its endeavors today, and we are pleased that these three outstanding leaders have elected to contribute their time and talents to help support the organization’s mission of solving the world’s hardest problems,” said Advisory Board Chairman David Perry, vice president of Corporate Strategy at Protective Life Insurance Co.

Foster joined McWane in 2011 and has responsibility for operating divisions focusing on high-tech companies and commercial real estate investments, as well as corporate development initiatives. Previously, Foster helped lead the turnaround of two public companies, advised Lehman Brothers during its bankruptcy, and executed $13 billion in mergers and acquisitions, financing and real estate transactions.

Foster has held senior management roles in public and private companies and has a successful track record leading early stage growth companies, corporate turnarounds, principal investments and corporate development. He was co-founder of Redmont Hospitality and served in senior roles at Gaylord Entertainment and the Trust Co. of Sterne, Agee & Leach.

Foster received a bachelor’s degree in business administration from Washington and Lee University and an MBA from Vanderbilt University. He holds the Chartered Financial Analyst (CFA) designation.

Monconduit serves as the assistant to the executive vice president of External Affairs for Alabama Power. Since 2002, Monconduit has served in a variety of leadership roles responsible for ensuring the safe, reliable, and cost-effective operation and maintenance of the company’s generating power plants.

She is engaged with several civic and charitable organizations, including the Women’s Fund of Birmingham and the National Society of Black Engineers, where she co-hosts an engineering camp for over 200 Birmingham students every summer. She has been recognized by the Engineering Council of Birmingham for her service to the community and is a Distinguished Service Award recipient.

Monconduit graduated from the University of Evansville with a bachelor’s degree in civil engineering.

As corporate senior director of Commercial Leadership at Coca-Cola Bottling Co. UNITED, Nielsen has responsibility for all commercial leadership and capability functions. He previously served as director of Commercial Leadership-Retail for the company, with responsibility for leading project development and implementation focusing on Go-To-Market processes, strategic route planning, commercial capabilities, and sales force automation.

Nielsen received a bachelor’s degree in English literature from The University of the South, Sewanne and later completed an MBA at Vanderbilt University.

“The addition of these new members will enhance Southern Research’s relationship with the Birmingham business community,” said Watson Donald, the organization’s senior director of External Affairs. “They will join with the other Advisory Board members to provide us with valuable feedback on our multifaceted activities as they move forward in their own business careers.”

In addition to Perry, existing Advisory Board members are:

The Southern Research Advisory Board was established in 2015. 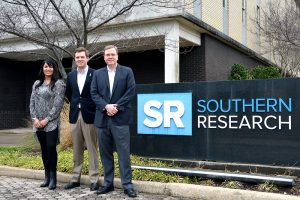